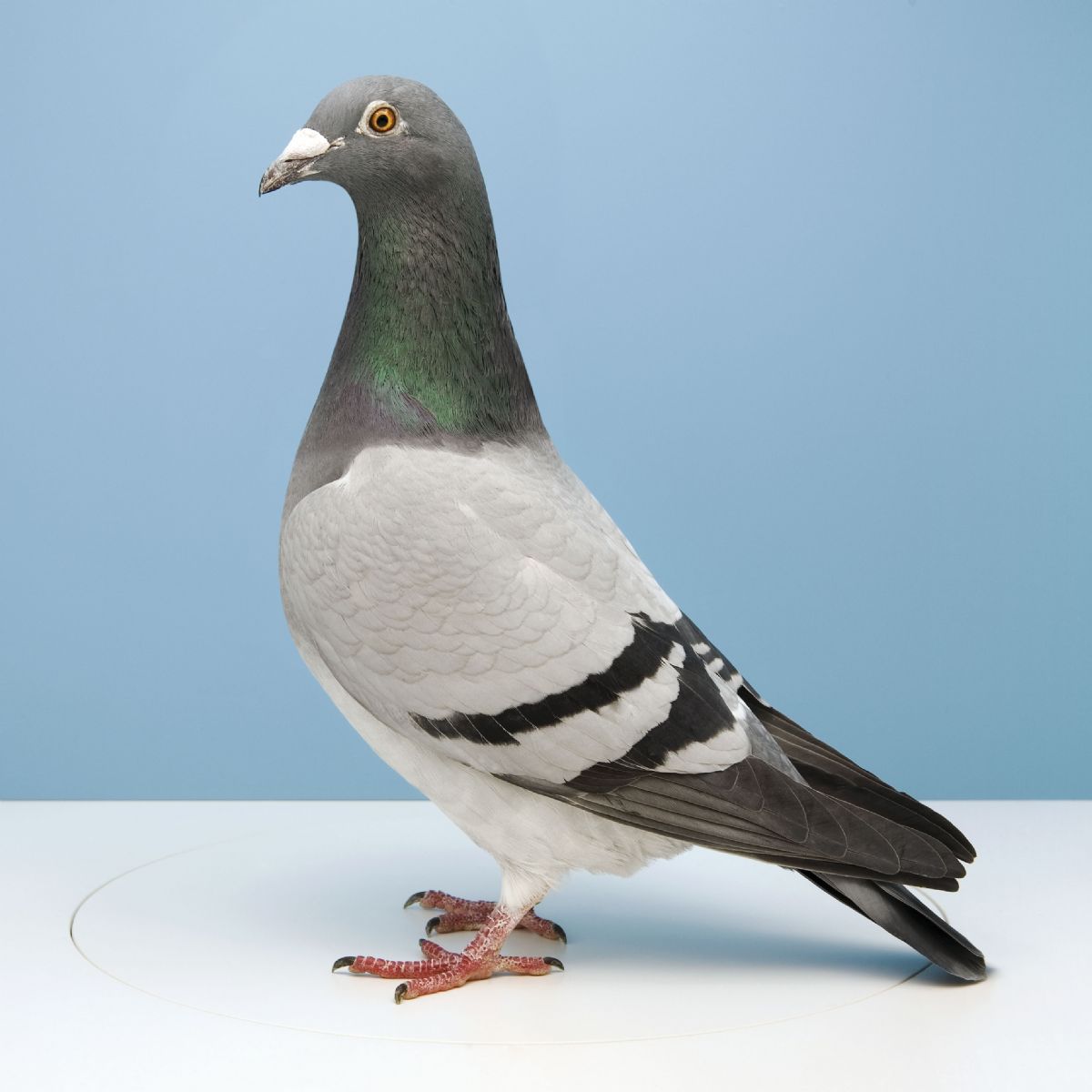 Superstar Roosje was bred from two world famous blood lines in Will & Falco’s pigeon loft in 2003. The father’s side was the illustrious Klak line, and the 46 Verbart line on the mother’s side are responsible for her unique genetic makeup.

Like all the other pigeons in Will and Falco’s breeding loft, before she was able to prove her value in the breeding loft, she first had to show what she was capable of in the races.

And this was, in one word, phenomenal. Her ability to win 1st place in big competitions, sometimes minutes ahead of the rest, was something she passed on to her successful descendants, both in flight and in the breeding loft.

Almost weekly, reports come in detailing the top achievements by the pigeons bred from Roosje’s line.

Roosje already showed what she was capable of as a youngbird on a heavy flight from Troyes, and once she became a yearling, she developed into a full-fledged star. It started right away in the 1st big competition against 2,450 pigeons in which she reached a speed of 1900 meters per minute which meant she possessed a razor-sharp compass in her head.

Coupled with her unconquerable character, this makes her a real-life super pigeon. A few weeks later, she confirmed this by winning the 1st NPO against 5503 pigeons in the dicey La Ferte Bernard race (539 km). This was already fantastic but when you consider that she also flew a good 6 minutes ahead of the others you will understand how truly exceptional this pigeon is. She won 1st place at each distance from Duffel (110 km) and all the way up to Bourges (600 km).

Her last active flying year was 2006 and during the course of that year she showed unrivalled prowess by coming in 1st at Strombeek against 2307 pigeons. In 2006 she was basketed only 9 times but did win 1st place three of those times. It was high time to place her in the breeding loft for good.

This was the best decision Will & Falco ever made because her strong-willed character combined with her athletic ability also seemed to pass on perfectly as we have seen it over several generations and with different bloodlines.

Roosje was a super, rare talent that is seldom seen and she has by now managed to make her mark on the breeding of many generations. On top of that, she was also gorgeous pigeon to look at with an expressive head and richly pigmented yellow-red eyes.

Many fanciers were able to step out of anonymity with the blood of Roosje or provide their champion colony with a formidable injection with her winning genes.

Roosje’s descendants won an incredible number of 1st place prizes and in just the NPO races alone, they have won 6 times - at, among others, Sens, St Quentin 2x, Morlincourt, Orléans and Troyes against an average of over 8,700 pigeons!

No wonder Roosje quickly grew to become the figurehead of the Ebben colony and her blood became more and more firmly embedded year after year in her small but ever so rich breeding loft. In 2011, Roosje laid her last eggs and still flew her daily rounds over Beneden-Leeuwen. Roosje died her armour in 2016 when, after a short chase in the open air, she fell culprit to a bird of prey...


In Will and Falco’s breeding loft, they still have at least 10 fantastic grandchildren from Roosje, 3 of which are direct descendants. What an indescribable wealth!  The attack by the bird of prey was heart-breaking, but the unrivalled successes that her descendants still bring to many lofts only make the memory of Roosje warmer and more valuable.

Peter Crans has a great granddaughter of Linus again!

Last year Peter Crans had the 9th national ace pigeon youngbirds NPO with a grandchild of our NL16-1310994 'Linus' (when mated to his full sister NL17-1056002 'Mable'). Recently he reported he had a great daughter from his 'Ebby' (daughter 'Linus') again.
Read more

Last weekend Hendriks-Sanders won 1st Chimay 2,417 pigeons. It was their 4th vicotory in their combine this year.
Read more